skip to main | skip to sidebar

Dr. Birnbaum came by this afternoon with Dr. Whitlinger.  Dr. Birnbaum is the neurologist called in by Dr. Crooks.  Dr. Whitlinger is an oncologist who works with Dr. Hacket.  They delivered the bad news.  The spinal tap shows a lot of active, malignant cancer cells.  Dr. Birnbaum says the fact that the spinal fluid contains malignant cancer cells is a sign they have spread beyond the spinal area to the whole body.  His take is that the cancer is interfering with neural transmissions, which is the cause of Sue's muscle failure, as well as the cause of Sue's pain.
The local doctors said they'd report the findings to Dr. Wolf, which apparently they did.  Dr. Wolf called my cell phone later in the afternoon and I put it on speaker and set the phone on Sue's stomach, and we had a conference call with him.  He was grave and, God bless him, he's never pulled any punches. When asked for his honest prognosis, he gave it to us straight.  He says it isn't good.  He's treated a lot of myeloma patients over the years and rarely has had one this tough.  He will prescribe massive doses of Dexamethasone (40 mg/day) and the current rave drug for myeloma, Revlimid.  However, he said Sue's cancer has proven extremely resistant and, because of her 4/14 chromosome transposition, he does not want us to be overly optimisitic.  She's had Velcade (VDD) chemo treatments last summer, a Melphalan autologous stem cell transplant in September, radiation in December, and now, barely two months later, the cancer is back and aggressively advancing.  He said her time left could be in the range of "a couple of weeks to a couple of months."  He says she will not leave the hospital to begin the Dexamethasone and Revlimid, and might not leave the hospital at all if the Revlimid does not work.
In one of my earliest blog posts from May 2009 titled "The Bomb", the one where the local oncologist first informed us that Sue had multiple myeloma, I naively stated that "cancer's cancer."  A falser tautology has never been penned.  In the past ten months we have learned that there are better and worse cancers to have, and that , in the grander scale of things, multiple myeloma is one of the bad ones.  In the past ten months we have learned that the treatments for multiple myeloma have improved greatly, and that life expectancy for myeloma patients is going up.  We have followed the blogs of lots of "survivors" of multiple myeloma who are years past their diagnosis.  We have also followed the blogs of several myeloma patients who succumbed to the cancer.  We are not giving up the fight just yet, but it's looking like Sue will pull the three year post-diagnosis survival median down.
But also in the past ten months we have acutely tuned in to another lesson not specifically tied to the cancer diagnosis.  People have asked, what's Sue's prognosis?  And both Sue and I have replied that her prognosis is the same as yours and mine: None of us know when our time is going to be up.  On the other hand, she now has a better fix on the answer to that question than you or I do, and in some ways she may be better off for it. 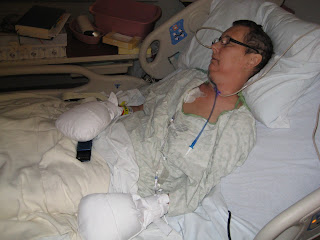 On the lighter side, they've given Sue a pair of "mittens" to wear while she's sleeping so that she doesn't pull out her feeding tube.  They're more like boxing gloves than mittens.  In every hospital stay she's always wanted her cell phone close at hand as a "life line" to her friends and family.  She's sleeping now, with her right hand "mitten" placed on top of her cell phone in her lap.  The mittens are tightly velcroed at the wrist and, I swear, I don't know how she could ever answer that phone or make a call or even call the nurse with the call button with those big mittens on.  Or press her PCA button for pain medication activation.  On second thought, it isn't the lighter side.  It's another sad page in a sad chapter of an otherwise really good and upbeat book.
Posted by by George! at 8:20 PM

What This Blog is About

My wife hadn’t been well for a while. In May of 2009 we found out why. She had cancer. Multiple myeloma. She was given the news on Thursday and started chemotherapy treatment the following Monday. She fought the good fight for the better part of a year with chemotherapy, an autologous stem cell transplant, radiation, and more chemotherapy, but the nasty cancer kept coming back. On March 29, 2010, not quite eleven months after her diagnosis, Sue died in her sleep from complications of multiple myeloma.

The Big C can set anyone’s mind to spinning. Shortly after Sue's diagnosis, in mid-May of 2009, I realized my mind had been spinning through stages of thought and it might be well to try to capture them, more or less honestly, for my own reflection and for the benefit of anyone who might wonder what one thinks about when one’s spouse gets cancer. This blog may have particular relevance to those diagnosed with multiple myeloma and their families and care-givers, though it is probably generically relevant to many forms of chronic illness.

With my April 25, 2010 post titled "Adieu" I concluded blogging on this site. The blog archive is listed in chronological order, but if you click on a month it displays the actual blog posts in reverse order with the most recent blog for that month at the top and the oldest post at the bottom.